Black soldier fly larvae instead of soyabean as pig feed

Black soldier fly larvae can be a protein source in the feed of growing pigs instead of soyabean, as reported by researchers in the Netherlands.

The Wageningen University and Research and Leiden University in the Netherlands conducted a trial to see how pigs react if they have black soldier fly larvae as food instead of soybean meal. The last couple of years the interest in insects as food has grown.

The Universities did a trial.The trial was divided in two groups of growing pigs. One group ate soybean as a protein meal and the other group was fed larvae from black soldier flies. The larvae expand the levels of ‘Bifidobacterium’ baceteria. This bacteria is known about having a useful effect on the health of humans and animals. And the larvae protects against unsave bacteria. And insects as feed provide functional that is valuable for pig health and building walls for protein synthesis.

This trial is good news for the burgeoning industry. And that in the future insect feed can replace soyabean in grower pig diet. Insect feed seems not only to be healthier than insects. It is also better for the environement. Only the cost is more expensive. It is for this reason that the market go towards insects not as a bulk feed, but as a specialty product in animal feed to boost animal health and welfare. 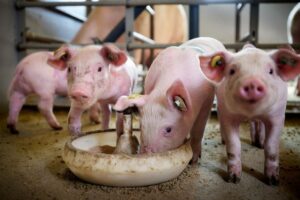